Two Approaches to Standards and Interoperability for Active RFID (aRFID)

[this article was previously posted at the Dash7.org web site blog – http://dash7.org/blog/]

In this series on interoperability for Active RFID, we have discussed:

What we haven’t discussed is whether the ISO 18000-7:2008 standard is the only way today to get to true interoperability, at least in the context of WiFi, satellite, or cellular (GPRS) based tags/transponders.

Standards are key to building an interoperable heterogeneous infrastructure.  They allow multiple players to compete for the stakeholders’ business, thus allowing lower costs and less risk caused by the failure of a single provider.

Active technology has had two delivery methods.  One method consists of tags that talk to a reader network which, in turn, communicates via LAN, WAN, or web to users or other back office systems to include in-transit visibility systems.  The second method skips the reader infrastructure.  It consists of tags talking via the LAN, WAN, or web to the users or back office systems.  This method often uses WiFi, cellular/GPRS, or satellite technology. 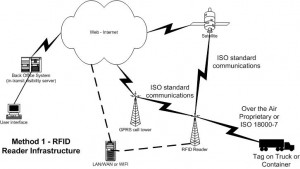 The second method has always relied on communication standards for its interchange of information to users and back office systems.  The manufacturers’ approach to compliance with these standards has been proprietary to their solutions but still allowed an interoperable exchange of information. 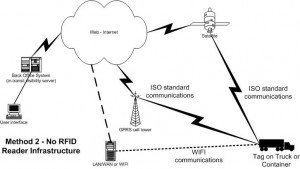 The first method of delivery for active technology has had no over the air standards until the US DoD worked with the International Standards Organization (“ISO”) to develop the 18000-7:2008 standard.  The standard has enabled the interoperable communication between tags and readers from different manufacturers.  Equally important is that that 18000-7 standard defined the way the data on the tags is stored and formatted such that this interoperable communication is also interoperable at the data level.  Thus, communications to disparate back office systems is compliant not just at the communications level but at the data structure level as well.  This is true for all the primary data blocks included in the standard.  The standard does allow for a user defined data area, standardized in its location within the tags storage but not standardized within its block area for data structure and organization.  The DoD with its RFID III requirements went that one step further and standardized the organization and structure of this user data area.

The second method allows for interoperable communications of data between different manufacturers equipment but it does nothing to standardize the data structures within those communications.  Thus, even though the tags can talk effectively to different back office systems their data organization is proprietary and interoperability is not really present, or at least effective.

Today, only communications that are standardized AND make use of the 18000-7 data structure standards are truly interoperable and effective.

The 18000-7 standard doesn’t cover everything needed. It omits some sensor functions, for example, and the remainder of the RFID III statement of work filled in many of the gaps by adding data structures for the user data area and host/in-transit visibility server (“ITV”) communications but the bottom-line for commercial operations is the 18000-7 standard enables the implementation of cost effective infrastructures and in-transit visibility systems.  What has been needed for active RFID to mimic the interoperability success of the passive world was a set of standards from a recognized standards body and a clout-heavy adopter.  The US Department of Defense and its NATO (North Atlantic Treaty Organization) partners (about 40 nations in total) constitute that clout-heavy adopter, and the ISO standards group is that globally recognized standards body.

Related posts in this series are :

Interoperability for active RFID: at last, different vendors work together like passive RFID!

Interoperable RFID – Show me the money!

Interoperable RFID – How will the money be delivered?

Interoperable RFID – Why hasn’t this been done already?

Interoperable RFID – Who are the players?

About the Author
Tom is a high impact manager and consultant in Supply Chain Execution Systems and processes to include logistics, warehousing, and transporation. He has in depth skills in warehousing operations and technologies to include most forms of automatic identification technologies (barcode, active RFID, USID (ultrasound)), warehouse management systems, transportation management systems, and warehouse automation. He has had the roles of warehouse manager, WMS systems developer, systems integrator, industry analyst, supply chain consultant, and expert witness.
Social Share